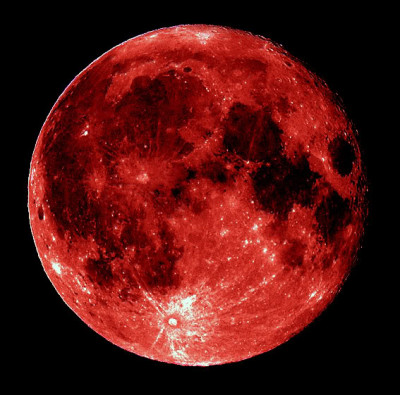 From the Epoch Times:

The “Blood Moon,” or a moon that can turn red or orange, is slated for April 15–along with a lunar eclipse.

The rare sight from Earth is attracting a lot of attention, partly because it’s the first major celestial phenomenon since early January.

It’s also the beginning of “an extraordinary series of lunar eclipses,” according to the United States space agency, NASA.

After the one on April 15, another will follow on October 8 of this year.

This series is referred to by experts as a lunar eclipse tetrad.

“The most unique thing about the 2014-2015 tetrad is that all of them are visible for all or parts of the USA,” said longtime NASA eclipse expert Fred Espenak in a post on the agency’s website.

Usually, about two lunar eclipses happen per year, but not all of them are total. Some are barely visible while others are partial eclipses.

The eclipse on April 15 will begin at 2 a.m. EDT when the edge of the Moon first enters the amber core of Earth’s shadow. Totality occurs during a 78 minute interval beginning around 3 a.m. in the morning on the east coast (midnight on the west coast).

Weather permitting, the red Moon will be easy to see across the entirety of North America.

Why Does the Moon Turn Red?

NASA explains why the moon will likely turn red:

“A quick trip to the Moon provides the answer: Imagine yourself standing on a dusty lunar plain looking up at the sky. Overhead hangs Earth, nightside down, completely hiding the sun behind it. The eclipse is underway.

“You might expect Earth seen in this way to be utterly dark, but it’s not. The rim of the planet is on fire! As you scan your eye around Earth’s circumference, you’re seeing every sunrise and every sunset in the world, all of them, all at once. This incredible light beams into the heart of Earth’s shadow, filling it with a coppery glow and transforming the Moon into a great red orb.”

The name “Blood Moon” isn’t usually identified as an official astronomical term; it comes from hunters who tracked and killed their prey by autumn moonlight, stockpiling food for the winter ahead. “You can picture them: silent figures padding through the forest, the moon overhead, pale as a corpse, its cold light betraying the creatures of the wood,” according to NASA.

Some people, such as John Hagee, pastor of a church and author of “Four Blood Moons: Something is About to Change,” say that the tetrad holds religious significance, particularly because the first two blood moons align with the Passover and the Feast of Tabernacle. Hagee told Fox News that the tetrad signals the end of the modern era.

“Technically, the end times began with the outpouring of Pentecost 2,000 years ago,” said Hagee. “We have been in the end times a long time.”

Hagee is credited for popularizing using the term Blood Moon to refer to the full moons in the lunar tetrad.

Another term that is used to refer to this full moon is the Full Pink Moon.

That doesn’t refer to the moon turning pink.

Instead, according to the Farmer’s Almanac, the first full moon in April is dubbed thus.

“This name came from the herb moss pink, or wild ground phlox, which is one of the earliest widespread flowers of the spring,” says the Almanac.

“Other names for this month’s celestial body include the Full Sprouting Grass Moon, the Egg Moon, and among coastal tribes the Full Fish Moon, because this was the time that the shad swam upstream to spawn.”

The name comes from Native Americans. It doesn’t mean the moon will be pink in color, but it refers to the color of the flowers.
Exploring Lunar Eclipse Tetrads

NASA explains that Italian astronomer Giovanni Schiaparelli first pointed out that the frequency of tetrads varies over time. For instance, there were no tetrads from 1582 to 1908, but from 1909 to 2156 there are 17.

The Royal Astronomical Society of Canada says that after the upcoming tetrad, the next one will take place in 2032 and 2033. The one after that is slated for 2043 and 2044.

All told, there are slated to be six tetrads through 2091, not including the upcoming tetrad.