(CNN)Stephen Hawking, the brilliant British theoretical physicist who overcame a debilitating disease to publish wildly popular books probing the mysteries of the universe, has died, according to a family spokesman. He was 76.

Considered by many to be the world’s greatest living scientist, Hawking was also a cosmologist, astronomer, mathematician and author of numerous books including the landmark “A Brief History of Time,” which has sold more than 10 million copies.
With fellow physicist Roger Penrose, Hawking merged Einstein’s theory of relativity with quantum theory to suggest that space and time would begin with the Big Bang and end in black holes. Hawking also discovered that black holes were not completely black but emit radiation and would likely eventually evaporate and disappear. 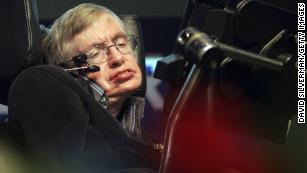 Tributes flood in for Stephen Hawking
“A star just went out in the cosmos,” Lawrence Krauss, a theoretical physicist and cosmologist, wrote on Twitter. “We have lost an amazing human being.”
Content by Eni
Empowering farmers can vitalise the community
Experience the remarkable story of Nigeria’s Green River Project.
Hawking suffered from ALS (amyotrophic lateral sclerosis), a neurodegenerative disease also known as Lou Gehrig’s Disease, which is usually fatal within a few years. He was diagnosed in 1963, when he was 21, and doctors initially gave him only a few years to live.
The disease left Hawking wheelchair-bound and paralyzed. He was able to move only a few fingers on one hand and was completely dependent on others or on technology for virtually everything — bathing, dressing, eating, even speech.
Hawking used a speech synthesizer that allowed him to speak in a computerized voice with an American accent.
“I try to lead as normal a life as possible, and not think about my condition, or regret the things it prevents me from doing, which are not that many,” he wrote on his website.
“I have been lucky that my condition has progressed more slowly than is often the case. But it shows that one need not lose hope.” 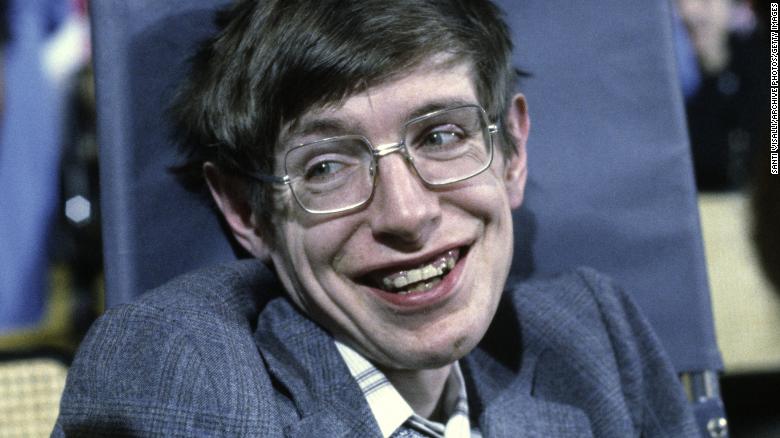 Cosmologist Stephen Hawking on October 10, 1979, in Princeton, New Jersey.
Hawking was married twice. He and his first wife, Jane Wilde, wed when he was still a graduate student and remained together for 30 years before divorcing in 1995. Hawking was later married for 11 years to Elaine Mason, one of his former nurses.
Hawking was born in Oxford, England, on what an auspicious date: January 8, 1942 — the 300th anniversary of the death of astronomer and physicist Galileo Galilei.
In an exclusive interview with CNN in October 2008, Hawking said that if humans can survive the next 200 years and learn to live in space, then our future will be bright. 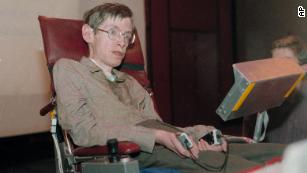 “I believe that the long-term future of the human race must be in space,” Hawking told CNN’s Becky Anderson.
“It will be difficult enough to avoid disaster on planet Earth in the next 100 years, let alone next thousand, or million. The human race shouldn’t have all its eggs in one basket, or on one planet. Let’s hope we can avoid dropping the basket until we have spread the load.”
At Cambridge, he held the position of Lucasian Professor of Mathematics — the prestigious post previously held by Sir Isaac Newton, widely considered one of the greatest scientists in modern history — for 30 years until 2009.
Yet Hawking once said if he had the chance to meet either Newton or Marilyn Monroe, he would opt for the movie star.
After stepping down, Hawking continued to work at the university as director of research at the Institute for Theoretical Cosmology. The following year, he co-authored “The Grand Design” with Leonard Mlodinow.
After the book was published in 2010, Hawking told CNN that science can explain the universe without the need for a creator.
“Gravity and quantum theory caused universes to be created spontaneously out of nothing,” Hawking said in 2010. “God may exist, but science can explain the universe without the need for a creator.”
“Science is increasingly answering questions that used to be the province of religion,” he added. 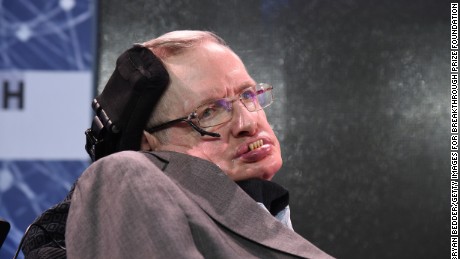 Hawking became a hero to math and science geeks and a pop-culture figure, guest-starring as himself on “Star Trek: The Next Generation” and “The Simpsons.” His life was dramatized in the 2014 movie, “The Theory of Everything.”
He had at least 12 honorary degrees and was awarded the CBE in 1982. A CBE, or Commander in the Most Excellent Order of the British Empire, is considered a major honor for a British citizen and is one rank below knighthood. 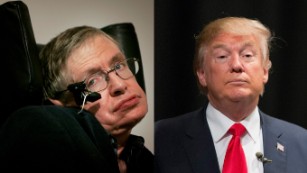 Stephen Hawking: ‘I may not be welcome’ in Trump’s America
Despite being a British citizen he was awarded the Presidential Medal of Freedom, the US’s highest civilian honor, in 2009 by President Barack Obama.
In September 2016, Hawking joined 375 “concerned” scientists in penning an open letter criticizing then-presidential candidate Donald Trump, citing the threat of climate change and blasting his push for the US to leave the Paris accord.
Fellow scientists hailed Hawking for his work and influence in the field.
“His passing has left an intellectual vacuum in his wake,” tweeted Neil deGrasse Tyson. “But it’s not empty. Think of it as a kind of vacuum energy permeating the fabric of spacetime that defies measure.”
Hawking leaves behind three children and three grandchildren. “We are deeply saddened that our beloved father passed away today,” Hawking’s children, Lucy, Robert and Tim, said in a statement. “He was a great scientist and an extraordinary man whose work and legacy will live on for many years. His courage and persistence with his brilliance and humor inspired people across the world.”
“He once said, ‘It would not be much of a universe if it wasn’t home to the people you love.’ We will miss him forever.”