From RollingStone.com:
Patti Smith Plans ‘Horses’ 40th Anniversary Celebrations for 2015
The singer also previewed her next book, which follows up 2010’s ‘Just Kids’

Patti Smith will not let the 40th anniversary of her breakthrough debut album, Horses, go unnoticed next year. Although the punk icon has yet to confirm dates, she plans on holding Horses-related events around the world, where she will perform the album.

“The exact date is November 10th, and I want to celebrate it in New York in a special way,” Smith tells Rolling Stone. “We have things we’ll be doing in Paris and London, everywhere, because it’s a true milestone. I’m proud to have a milestone like that.”

The significance of putting the album out on November 10th is something that still makes Smith laugh. Originally, she had planned to put Horses out on October 20th, what would have been 19th century French poet – and major Patti Smith inspiration – Arthur Rimbaud’s 121st birthday.

“Something happened because of the gas shortage – they didn’t have enough vinyl – and it was postponed and I was really upset,” she recalls. “Then [Arista Records founder] Clive Davis told me, ‘Really sorry, it’s going to be November 10th. There’s nothing we can do that.’ And I just laughed and said, ‘Well, that’s the anniversary of Rimbaud’s death.’ It was still magical.”

The singer says she’s looking forward to commemorating the record, which contained the single “Gloria” and many songs that have become concert staples like “Redondo Beach” and “Free Money.” “I think we continue to deliver all of these songs sometimes stronger than when I was young,” the 67-year-old says. “So I’m going to be happy to celebrate it, to perform the album with happiness, not with any kind of cynicism or a cashing-in thing. It will be a true, proud celebration, so the answer is yes.”

Smith points out that her band still features her longtime collaborators guitarist Lenny Kaye and drummer Jay Dee Daugherty, who both played on Horses, as well as bassist Tony Shanahan, with whom she’s played since her return to the stage in the mid-Nineties. “If my pianist [Richard Sohl] hadn’t died young, he would be right with us,” Smith says. “My son and daughter often play with me.”

Along with the singer’s band, Smith’s son Jackson and daughter Jesse will also feature on an album she is currently working on. “They’re really gifted musicians, like their father,” Smith says, referring to the late MC5 guitarist Fred “Sonic” Smith. The vocalist hopes to get into the studio this winter.

Smith is also finishing up the follow-up to her 2010 book Just Kids, which documented her relationship with photographer Robert Mapplethorpe and won the National Book Award for Nonfiction. “It’s due Friday,” she says.

Smith describes the book’s content as being “sort of in present tense,” which contrasts Just Kids. “I wanted to write a contemporary book or just write whatever I felt like writing about, and it’s things going from literature to coffee to memories of Fred in Michigan,” she says. “It’s whatever I felt. I hopped on a train and kept going.”

The singer shared the news during an interview with Rolling Stone – detailing the songwriting process for “Mercy Is,” the song she wrote for the movie Noah – which will run in full next week. 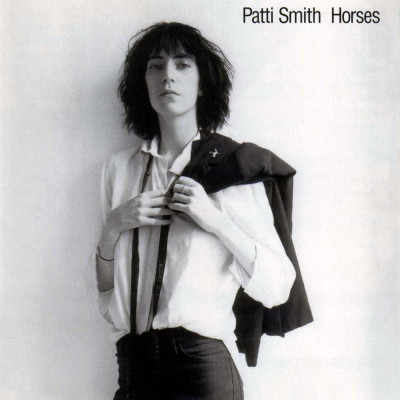