Scientists detect ‘fingerprint’ of first light ever in the universe

(CNN) Scientists have detected traces of the earliest light in the universe thought to emanate from the first stars formed after the Big Bang, billions of years ago. The new report, published in Nature on February 28, said researchers found the “fingerprint” of the universe’s first light as background radiation left on hydrogen. 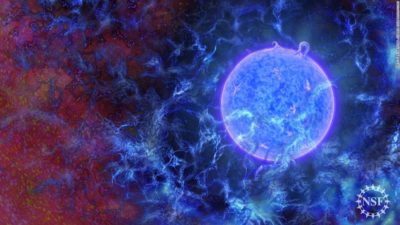 “This is the first time we’ve seen any signal from this early in the Universe, aside from the afterglow of the Big Bang,” Judd Bowman, an astronomer at Arizona State University who led the work, said in a statement.

Following the Big Bang, physicists believe there was only darkness in the universe for about 180 million years, a period known by scientists as Cosmic “Dark Ages.”

As the universe expanded, the soup of ionized plasma created by the Big Bang slowly began to cool and form neutral hydrogen atoms, say physicists. Eventually these were pulled together by gravity and ignited to form stars.

The new discovery is the closest scientists have ever come to observing that moment of “cosmic dawn.” 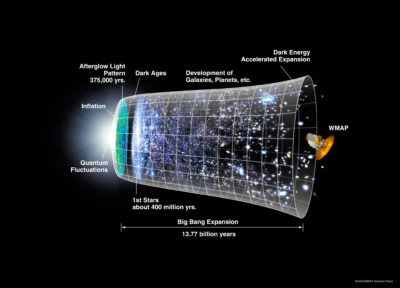 “(Although) we can’t see the stars themselves, we’re seeing the effect they have on the gas around them.”

The discovery was made at a radio telescope in Western Australia, the Murchison Radio-astronomy Observatory, operated by the CSIRO.

The telescope’s remote location in rural Australia, inside a legislated “radio quiet zone,” kept interference from other human-made devices to a minimum, CSIRO said in a statement.

In their statement, CSIRO said Bowman and his team have been working to detect the signals for 12 years.

Bannister said there would still need to be additional work done to confirm the findings of Bowman’s team but the discovery was still a milestone.

“This is the very beginning of a very long journey. There’s been a lot of work to prepare for this point and now its been confirmed, everyone gets excited and more work will happen,” Bannister said.

“There’s a whole bunch of different times in the universe which are still inaccessible to use with our current telescopes … there’s a lot more to explore.”