Here is what I think:

Regarding Mr. Gianficaro’s article:…People are only timing the recent Bruce Springsteen shows because one might break the record for the longest E Street Band concert (and the one on 9-7-16 in Philly did, as far as US shows go) – it’s just for fun. But the writer is not into Bruce, so he sees idolatry instead of loyalty, a golden idol instead of the Boss of a family that extends from the E Street Band (which includes his wife and his best friend) to all the happy people in the audience. His concerts are like religious revivals, and, yes, many of his fans are hardcore fanatics – just like fans of an endless number of acts. But we’re all here for a good time; we’re here for the 3 or 4 hours that will transport us out of our mundane or perhaps miserable lives; we’re here to listen & sing along to the silly songs, the topical songs, and the songs that can break your heart. As one of the hardcore fanatics, I can say that I don’t worship Bruce; I might idolize him somewhat, but I realize that like Elvis Costello, U2, Stephen King, Howard Stern, Martin Scorsese, Metallica, and countless others, he worked hard to get where he is, starting from the bottom. There was no silver spoon or American Idol. And like many of the people I mentioned, Bruce believes that he works for a living (though obviously, he doesn’t ever have to play again), and he loves his work and continues his artistic journey despite having to fight his clinical depression. That’s something to admire – a work ethic. In many of his songs, he tries to become the characters: the rundown losers, the guy patching your roof, and, of course, a boy and a girl in a car and a road that seems like it’ll never end; it’s clear that he respects them all, from the deliriously happy to the desperate and the hungry – and us. I can respect that the writer is not into Bruce & the band – there was a time, long ago, when I wasn’t. But we’re not there to praise the man (okay, maybe a little); we’re there to give ourselves a little bit of praise. These songs have become our songs after all, and they are frequently about us. Bruce invites us into his family – he spends much time slapping and shaking hands while he sings; he crowd surfs and runs through the crowd at the tender age of 66; he lets children take a shot at singing the chorus to “Waitin’ on a Sunny Day” whenever he plays it; he grieves with us as images of the departed Clarence and Danny fill the screen; and he invites people to dance on stage with him and the band during “Dancing in the Dark.” Although we get to lose ourselves for a couple of hours, what we’re losing is the 9-5 grind, the wheelchair, the nasty boss, the horrible home life, the missed opportunities – and what we get to do is remember our victories, we get to realize that we’re collectively celebrating and the person standing next to us is part of the family, and we get to immerse ourselves in the healing power of ROCK’N’ROLL!

As Bruce sang on Wednesday night: “We learned more from a three minute record than we ever learned in school.” Reflective or not (for me it is), the truth is in the pronoun: we.

IS ANYBODY ALIVE OUT THERE? 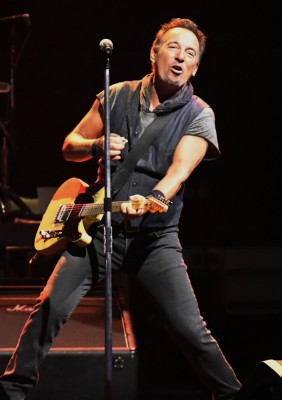