A little info on Wilkie Collins and his work:

Wilkie Collins was born in 1824 and studied to be a lawyer before devoting himself to writing. His novel, The Moonstone (1868), is considered the first English detective novel. The Woman in White was serialized 1859-1860. It is often called the first “sensation” novel. Sensation novels, which were extremely popular in Victorian era Great Britain in the 1860s and 1870s, mixed gothic and romantic notions, as well as melodrama. The genre sprung out of true crime books. Loss of identity and the wrongly accused man were common plots. (Foreshadowing Hitchcock!) Sensation novels brought together realism and romanticism, and thrillers like The Woman in White, were sometimes called “novels with a secret.” Collins’ life could be as scandalous and sensational as his work, especially after the public became aware of his unconventional love life: he lived with a widow and later met a 19-year-old girl, and for the last 20 years of his life, he maintained romantic relationships with both. Collins met Charles Dickens in 1851, and they became fast friends. Dickens would even go on to publish some of Collins’ work. For a time Wilkie Collins was even more popular than Dickens. He became addicted to laudanum, and when he became ill, it hastened his death, which he occurred in 1889.

Click HERE to see all the 50 in 52 Project posts on this blog. 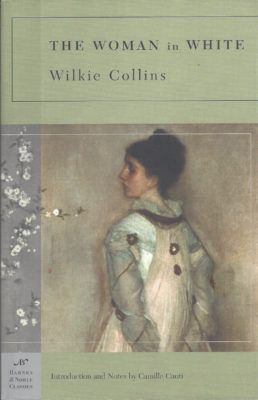