The 50 in 52 Project continues! (scroll down for more info)

Next up is….The Sun Also Rises by Ernest Hemingway (1926)

A little info on Ernest Hemingway and his work:
Ernest Hemingway was born in 1889 in Illinois. Hemingway, along with friend, F. Scott Fitzgerald, formed the nucleus of what Gertrude Stein called “the lost generation” of American expatriates living in Paris. Hemingway’s influence on literature cannot be overstated. He developed his staccato style during his time working for the Kansas City Star, but the simplicity of his writing is deceptive—he wanted to capture emotions in snapshots that eliminated decorative wording and verbiage. Like Fitzgerald, much of the beauty of his work can be found in his short stories. His best known novels: The Sun Also Rises (1926), A Farewell to Arms (1929), For Whom the Bell Tolls (1940), and The Old Man and the Sea (1952). Hemingway took his own life in 1961. (He father had done the same in 1928.) 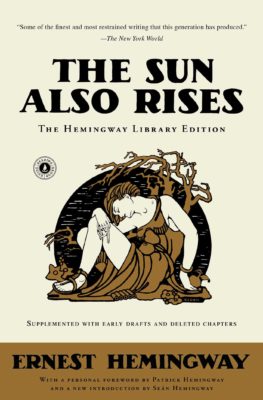