I’ve just finished the 18th book, My Ántonia by Willa Cather…only 32 more books to go!
Next up is….The Age of Innocence by Edith Wharton (1920)

I’m finally in the 1920s, my favorite literary decade!

A little info on Edith Wharton and her work:

Edith Wharton was born in 1862 in New York. Although she was a modernist, Wharton was heavily influenced by Henry James, who would become a close friend. Wharton was a popular writer, perhaps best known today for The Age of Innocence, The House of Mirth (1905), the novella Ethan Frome (1911), among others. She was very prolific: fifteen novels, seven novellas, and eighty-five short stories, plus poetry, criticism, and a memoir. Wharton grew up in New York society, which was the setting for many of her works. Wharton’s modernist approach was to often look in the rearview mirror, what she called her “backward glance,” employing dramatic irony and ambivalence to achieve a warm mixture of reminiscence and criticism. The Age of Innocence won the Pulitzer Prize in 1921. Martin Scorsese directed a beautiful adaptation in 1993 with Daniel-Day Lewis, Michelle Pfeiffer, and Winona Ryder (who was nominated for an Oscar). Edith Wharton passed away in 1937. 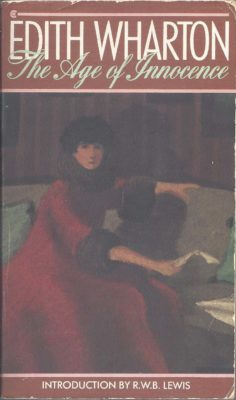