I’ve just finished the 26th book, The Grapes of Wrath by John Steinbeck…only 24 more books to go! (For a cool quote from the book, go my blog.)

Next up is….A Streetcar Named Desire by Tennessee Williams (1947)

A little info on Tennessee Williams and his work:
Thomas Lanier “Tennessee” Williams III was born in Mississippi in 1911. At times considered a late modernist, Williams broke through with a classic of post-modernist drama, The Glass Menagerie (1944), which he called his “memory play” because of its autobiographical themes and situations. While he also wrote novels, short stories, and a memoir, Williams is best known for his plays, including A Streetcar Named Desire (1947), The Rose Tattoo (1951), Cat on a Hot Tin Roof (1955), and The Night of the Iguana (1961). Both A Streetcar Named Desire and Cat on a Hot Tin Roof won the Pulitzer Prize for Drama. Elia Kazan would go on to direct successful film adaptations of both. Williams passed away in 1983. 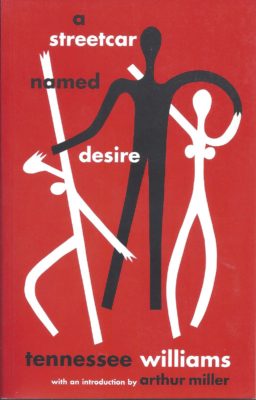