I’ve just finished the 22nd book, The Sun Also Rises by Ernest Hemingway…only 28 more books to go! (For cool quotes from the book, go my blog.)

A little info on D. H. Lawrence and his work:

David Herbert Lawrence was born in 1885 in England. Lawrence is one of the most interesting authors of the modernist period. While at times embracing a seemingly radical right wing agenda, he wrote books that were concerned with what he saw as the dehumanizing consequences and moral bankruptcy that came with modernism. His early novels championed feminism, but some female critics would later call him a master of misogyny. But it was his frank sexual writing that led many to disparage him. Vilified, censored, and labeled a pornographer, he spent much of the later part of his life in voluntary exile. His best known works: Son and Lovers (1913), Women in Love (1920), St. Mawr (1925), and Lady Chatterley’s Lover (1928), which was heavily censored when it was first released. Penguin published the unexpurgated text in 1960, and they were promptly sued by the government under the newly minted Obscene Publications Act. Many writers were called to testify (including E. M. Forster), and Penguin was found not guilty. Regardless, the book was banned in five other countries, including the US and Canada. Lawrence died in 1930 from tuberculosis. 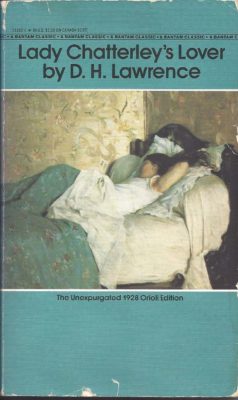