I’ve finished the first book, Pride and Prejudice…49 more to go!
THE 50 IN 52 PROJECT READING CHALLENGE FUNDRAISER CONTINUES!
(scroll to the bottom for more info)
Before I switch to the next work, one final Jane Austen quote:
“…a good memory is unpardonable.”
Elizabeth Bennet, Pride and Prejudice
So next up is….Frankenstein;, or, The Modern Prometheus by Mary Wollstonecraft Shelly (1818)
With a foot in the Gothic and Romantic movements, it is hard to believe she started writing the novella when she was 18. (It was published when she was 20.) The circumstances of its birth are generally well-known, but just in case…Mary Wollstonecraft Goodwin, her beau, the mighty poet Percy Bysshe Shelly, and another great poet, Lord Byron, found themselves deep in conversation about the occult, and Bryon made a challenge: “We will each write a ghost story.” Mary was the only one to finish. Fans of Milton will enjoy the analogy between the Frankenstein’s monster and Lucifer in Paradise Lost.
Final note: The monster is not called Frankenstein. That somehow became his name by the time of Universal’s 5th Frankenstein film, Frankenstein vs. the Wolfman. In Shelley’s work, the creature is “it” and “the monster.” I think he’s even called “the devil” and “the abortion.” (It’s been a while since I read it.) A few years ago, my friend Margaux Kent‘s first son, Søren, really got into monsters, and I told him that the creature is not called Frankenstein; better to call him Frankenstein’s monster. A year or two later, I heard Søren correct his younger brother, Silas. “No, it’s Frankenstein’s monster!”
THE 50 IN 52 PROJECT – Reading Challenge Fundraiser!
I challenged myself to read 50 books in one year (6/1/18 – 6/1/19) as a fundraiser to benefit RAINN, the Rape, Abuse, & Incest National Network.
I’m asking folks to sponsor me by pledging a $ amount per book read. You can pledge $1, $2, any amount you like, and you won’t need to pay until after 6/1/19, when you’ll receive an invoice based on the number of books I’ve read. To sponsor me & pledge, click HERE. 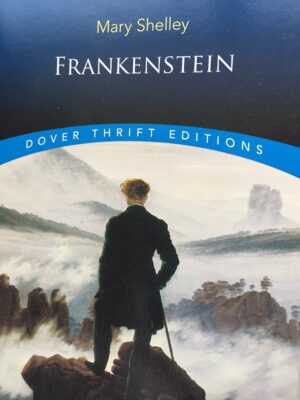