(CNN) — They were “wiseguys” or “goodfellas,” the federal government said Thursday of five alleged mobsters arrested on charges straight out of Martin Scorsese’s 1990 film about organized crime in New York.

In an indictment that reads almost like the script of “Goodfellas,” Vincent Asaro and other alleged members of the Bonanno organized crime family are accused of murder, racketeering, armed robbery, arson and extortion, including the 1978 Lufthansa heist at JFK International Airport.

Vincent Asaro is the first accused mobster to face charges in the Lufthansa heist. The crime netted more than $5 million in cash and $1 million in jewels, a record at the time, and was depicted in the Scorsese film.

Other crimes described in the indictment also sound similar to events portrayed in the film — a 1969 murder, burning a New York building, and a racketeering operation that used threats of violence to extort money from victims.

The indictment includes a description of the structure and activities of New York’s La Cosa Nostra organized crime network that was made up of the Bonanno enterprise and four other families.

“Members of the crime family were referred to on occasion as ‘goodfellas’ or ‘wiseguys,'” the indictment said. 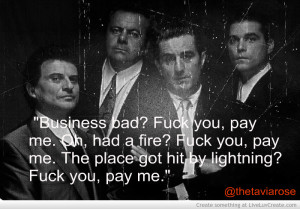