I’ve just finished the 24th book, As I Lay Dying by William Faulkner…only 26 more books to go! (For a cool quote from the book, go my blog.)

Next up is….Their Eyes Were Watching God by Zora Neale Hurston (1937)

A little info on Zora Neale Hurston and her work:
Zora Neale Hurston was born in Alabama in 1891. During her time at Barnard College, she was involved in ethnographic research, which led to her earning a BA in anthropology. After college, she became friends with the poet Langston Hughes, among other writers, and soon become a central figure of the Harlem Renaissance, an explosion of African-American culture that began in the 1920s. The Harlem Renaissance brought national focus to intellectual and artistic achievements (across all mediums) by African-Americans. (Just some of the names that came out of this modernist movement: Duke Ellington, Josephine Baker, and Jean Toomer.) Hurston only published four novels during her lifetime (but over fifty short stories). Their Eyes Were Watching God is her most famous work. But for decades after her initial acclaim, her writing was largely marginalized, her achievements generally unrecognized by the literary world, but novelist Alice Walker (The Color Purple) changed all that with an article in Ms. Magazine: “In Search of Zora Neale Hurston” (1975). Hurston dealt with much racism during her various careers, but she was unflappable, writing, “Sometimes, I feel discriminated against, but it does not make me angry. It merely astonishes me. How can anyone deny themselves the pleasure of my company. It’s beyond me.” Zora Neale Hurston passed away in 1960. 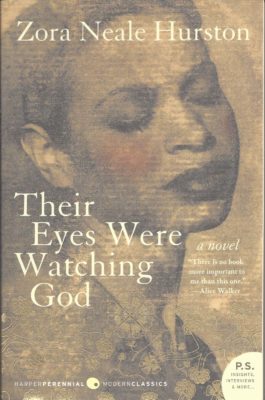