The 50 in 52 Project Reading Challenge

Next up is….Heart of Darkness, a novella by Joseph Conrad (1899)

This is my last book from the 19th century!

A little info on Joseph Conrad and his work:

Joseph Conrad was born in 1857 in Berdichev in the Russian Empire (now the Ukraine) of Polish parents. After some time in France, he became a British merchant marine, and England would become his adopted home. (He became a British citizen in 1886.) When Conrad began writing, it was in his third language, English, which he did not speak fluently until his twenties. Besides Heart of Darkness, his major works include Lord Jim (1900), Nostromo (1904), and The Secret Agent (1907). Heart of Darkness is considered an early modernist work, although Conrad had one foot firmly in naturalism. (This means that the modernist era is coming up soon in the 50 in 52 Project Reading Challenge—my favorite era of literature!) Director Francis Ford Coppola based his film Apocalypse Now on Heart of Darkness—and its troubled production is detailed in a riveting documentary, Hearts of Darkness. Joseph Conrad passed away in 1924 at the age of sixty-six. 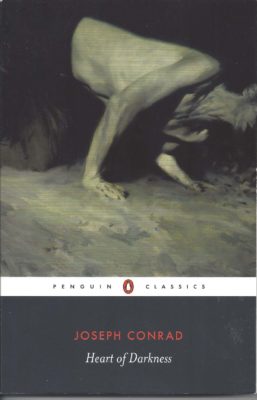