I’ve just finished the 12th book, The Portrait of a Lady by Henry James…only 38 more books to go!

A little info on Mark Twain and his work:

Mark Twain was born Samuel Clemens in 1835. Before he became Mark Twain, Clemens worked as an apprentice pilot on the Mississippi River and as a journalist. His first major book, was The Innocents Abroad (1869). His canon includes The Adventures of Tom Sawyer (1876), The Prince and the Pauper (1882), A Connecticut Yankee in King Arthur’s Court (1889), and Puddn’head Wilson (1894). Adventures of Huckleberry Finn was the first of the three sequels to Tom Sawyer. Ernest Hemingway wrote, “All modern American literature comes from one book by Mark Twain called Huckleberry Finn.” In his obituary, the New York Times called him, the “greatest humorist this country has produced.” William Faulkner called Twain, “the father of American literature.” Mark Twain brought realism to its height and helped usher in the Modernist era (roughly 1900-1939, especially the 20’s). Huckleberry Finn has been subject to censorship because of the use of the n-word, all the hoopla obscuring the fact that “Jim’s basic humanity…is the issue, not the fact that he is a slave,” according to critic John Seeyle. Jim isn’t actually a slave (the 13th Amendment passed in 1865), although his situation is at times dire; nevertheless Huckleberry Finn stands as Twain’s ultimate defense of the freedom of all men and women, a subject he would address in essays later in his life. Adventures of Huckleberry Finn casts shadow that is massive and largely inescapable. Twain passed away in 1910. 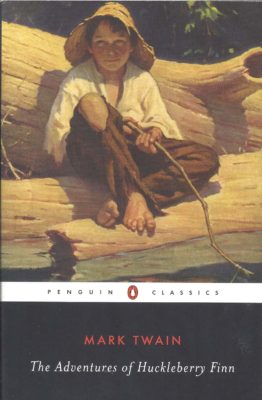