I’ve just finished the 6th book, The House of the Seven Gables by Nathaniel Hawthorne…only 44 more books to go!

A little Herman Melville info:
Herman Melville was born in New York City in 1819. After attending Albany Academy (among other schools), he sailed around Cape Horn, inspired by the book Two Years Before the Mast. For a time he was very close with New England writer Nathaniel Hawthorne; Melville dedicated Moby-Dick to him. The book’s full title is Moby-Dick; or, The Whale. In the novel, the whale is referred to as Moby Dick, without the hyphens. Melville was a Shakespeare scholar, bu the King James Bible and the works of John Milton were also massive influences on his writing. His works include the novel, Billy Budd, Sailor, and the short story, “Bartleby the Scrivener.” Moby-Dick stands as one of the greatest literary triumphs, inspiring generations and people as varied as writer Ralph Ellison, director John Huston, and Bob Dylan, who mentioned him during his Nobel Prize acceptance speech.

The 50 in 52 Project is a fundraiser for RAINN (Rape, Abuse, Incest National Network). I challenged myself to read 50 books in 1 year (6/1/18 to 6/1/19). I’m asking folks to sponsor me by pledging a $ amount per book I read. Sponsors don’t have to pay anything until after the Challenge finishes (6/1/19). To sponsor me, click HERE. For more info and a list of the 50 books, go to the top posting on the official 50 in 52 Project Facebook page.

Click HERE for links to all of the 50 in 52 Project posts on this blog. 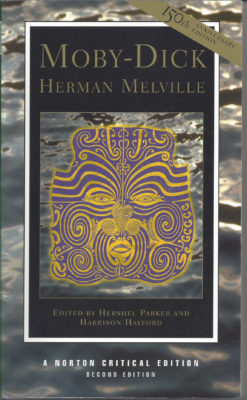