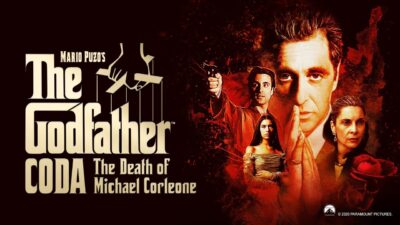 A look at what ‘The Godfather, Coda: The Death of Michael Corleone’ salvages

No filmmaker has made better use of the Director’s Cut format than Francis Ford Coppola. Rather than defang and truncate the first two Godfather films for network television in the 1970s, Coppola restructured them as one chronological saga – running seven hours and featuring loads of new footage – that allowed viewers a more straightforward perspective on the Corleone family tragedy. In 2001, Coppola unveiled Apocalypse Now Redux, a massive, meticulously restored expansion of his Vietnam masterpiece that some critics felt eclipsed the already-worshipped theatrical release. And just last year, the filmmaker returned to the catastrophic failure of The Cotton Club for a reworking that, if nothing else, gave the sluggish gangster flick some much-needed musical oomph.

So when Paramount announced earlier this year that Coppola had reworked 1990’s The Godfather Part III as The Godfather, Coda: The Death of Michael Corleone, there was reason to hope, based on previous successes, that the director had at last solved some of the trilogy capper’s nagging flaws. But what, realistically, could be done to enhance Sofia Coppola’s awkward performance as Michael’s daughter Mary, or fill the void left by Robert Duvall when he turned down Paramount’s paltry offer to reprise his key role as Corleone family consigliere, Tom Hagen? Coppola may be the maestro of the Director’s Cut, but to fully address these shortcomings he’d have to weave some kind of editorial sorcery that does not yet exist.

What Coppola accomplishes is less a magic act than an elegant threading of a needle. As he states in his introduction to the inelegantly titled The Godfather, Coda: The Death of Michael Corleone, the final installment was envisioned as an epilogue to the epic narrative of the first two movies. Indeed, that onerous title was the preferred moniker of both Coppola and The Godfather author Mario Puzo, who partnered with the director on the screenplays for all three films. Paramount understandably balked at the notion of treating the first Godfather movie in 16 years as, in Coppola’s words, a “summation” instead of an event, but by releasing it as “The Godfather Part III” (on Christmas Day, no less), they were priming audiences and critics for a grand finale the filmmaker had no interest in delivering; ergo, much of the initial criticism of the movie, which was rushed through production to meet that prestigious release date, hammered the film for a slow-to-develop plot that felt like a retread of its immaculate predecessors. The narrative familiarity wasn’t viewed as intentional, but rather as a sign of creative bankruptcy.

Coppola’s revision, which runs a shorter 157 minutes, resets expectations immediately by placing its subtitle not only in quotations, but separate from the classic Godfather marionette logo (a first for the series). The opening images of the flooded Corleone compound in Lake Tahoe have been replaced with a low-angle exterior shot of St. Patrick’s Cathedral, an architectural, midtown antiquity dwarfed by its neighboring skyscrapers – which is jarring given that the original The Godfather Part III kicks off in Old St. Patrick’s Cathedral downtown in Little Italy. What’s going on here? Coppola cuts directly to Michael’s meeting with Archbishop Gilday (Donal Donnelly), the overwhelmed, chain-smoking head of the Vatican Bank who desperately sells off the Vatican’s controlling shares in real estate conglomerate Internazionale Immobiliare to the Corleone family. Previously, this scene landed after the Vatican-sponsored ceremony and party feting Michael for his charitable works. By repositioning the Gilday scene, Coppola makes the stakes startlingly clear: Michael is leveraging the Catholic Church’s debt to legitimize the Corleone family business and, not for nothing, become one of the wealthiest men in the world. As the deal is all but consummated, Gilday sheepishly laments, “It seems in today’s world, the power to absolve debt is greater than the power to forgive.” To which Michael retorts, “Never underestimate the power of forgiveness.”

Forgiveness. This is the dramatic business Coppola and Puzo have chosen for Michael in this “coda,” and the film’s busy plotting finally serves a unified theme. Ever since he volunteered to assassinate Sollozzo and McCluskey, Michael has treated life as a chessboard; he sacrificed his own brother to checkmate Hyman Roth (Lee Strasberg), and accepted the abhorrence of his wife, Kay (Diane Keaton), as collateral damage. According to Peter Biskind’s The Godfather Companion, Coppola referred to the final shot of The Godfather Part II, wherein Michael sits in silence outside the Tahoe compound, as “the Hitler scene”. He’s not only settled all family debts; he’s severed himself from any semblance of a loving family. He is devoid of humanity. Twenty years later, as Michael enters the final act of his life, he desires expiation. For a man who has done so much evil, this seems an impossible ask. But viewers retain vivid memories of the man who once said, “That’s my family, Kay; it’s not me.” He had other plans. Could there possibly be a path to redemption for this self-made monster?

From Aeschylus to Shakespeare to Arthur Miller, the answer has always been an emphatic “No.” But like all great tragedians, Coppola coaxes his audience into believing there exists a catharsis that could cleanse Michael of his sins and restore the family he brushed aside. The passage of time does a lot of work in the film, and raises many questions: If the Corleone family is successful enough to buy a controlling share in the real estate company Immobiliare, what were they up to in the 1960s — i.e. the decade that sparked America’s fascination with the mafia (and inspired a bestselling book titled The Godfather)? What kind of heat came down on the organization after the assassination of JFK? Did they really avoid the lucrative drug trade that flourished throughout the Vietnam War and beyond?

The Michael of The Godfather, Coda has compartmentalized his business misdeeds. He’s oddly jocular. The Immobiliare deal is complete, pending the formality of the Pope’s approval. He’s a generation removed from his father’s Little Italy territory — now run by the John Gotti-esque Joey Zasa — and he has a savvy publicist (Don Novello) to handle all thorny press inquiries. He is virtually untouchable.

The business may be settled, but for Michael, a man of ultimate conquest, the personal must be confronted. This pursuit was clouded in the film’s previous incarnations, but, by leading with that Gilday scene (instead of the ceremony at the church, which has been excised entirely), it’s the solitary narrative thrust of The Godfather, Coda. Michael isn’t joking about “the power of forgiveness”. He believes atonement is possible. He believes he can reunite his family. He begrudgingly sanctions Anthony Jr.’s opera career, and entrusts the Corleone Foundation to Mary. Kay wants no part of this, but Michael, in a newfound show of vulnerability, allows her to exit a room on her own rather than shut her out. This constitutes growth on the Don’s behalf. As the action moves to Sicily, Michael pours on the charm. He whisks Kay off on a tour of his family’s home village, and summons the memory of the man she once loved (a man viewers barely glimpsed in the first movie). It almost works. It helps that Michael has hedged his bets. Though he’d be thrilled if Kay remarried him, he’ll settle for her not dreading him anymore. The latter appears to be negotiable.

When the Pope’s health goes south, the Immobiliare deal appears to be renegotiable, which places Michael at an unexpected disadvantage as he nears his goal of respectability. Michael expected the “legitimate” business world to be less ruthless than the criminal underworld, but, as he confesses to Connie, “The higher I go, the crookeder it becomes.” It’s an inversion of the naiveté evinced by Kay in The Godfather when she asserted senators and presidents don’t have men killed. Michael’s in over his head, and when he sees the sharks circling he has no choice but to hit back in an old school fashion. To do so, he must cede control of the family to his nephew Vincent (Andy Garcia), and hope for the best. But even if he succeeds, he now knows “legitimacy” is an illusion.

Those hoping for The Godfather, Coda: The Death of Michael Corleone to be a revelation on the level of Apocalypse Now Redux, or a springboard to a fourth chapter in the saga, will be disappointed. There are no surprises beyond the first 20 minutes of this version, save for the denouement, which denies Michael the release of death he received at the end of the previous cuts. His punishment is a long life (“cent’anni”), the very thing he stole from his enemies and, via one unforgivable act, his brother. Sofia Coppola’s infamous performance is what it is; she does the best with what she’s given, which isn’t very much. And that’s the unfixable element of this film. The pieces are there. Coppola and Puzo plotted it out sensibly. But Mary, whose death is meant to break our heart, never registers as more than a frightened child. In a way, this makes sense: she’s been lied to her entire life, and is romantically fixated on her cousin. This is grist for a psychological drama, and there are moments when The Godfather, Coda takes on the intimate grandeur of Luchino Visconti’s Sicilian family drama, The Leopard.

But this is Michael’s story. Mary is what happens when a father projects a false sense of principle. She is sheltered and, as an adult, helpless – incapable of navigating a world that is cruel beyond conception. In this sense, Coppola has mended the movie. The coda is a perfect summation of his twin masterpieces. It is an American tale. And it is finished.